BELOW – Subject Matter of Book

SPOILER ALERT: ONLY SCROLL DOWN IF YOU WANT TO LEARN ABOUT THE SUBJECT MATTER OF BELOW BEFORE READING THE BOOK!

BACK TO BELOW JACKET DESCRIPTION 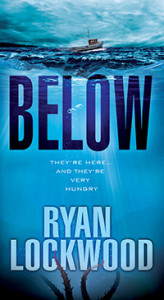 BELOW (2013) is a thriller novel about Humboldt squid. Giant Humboldt squid are predatory squid found the eastern Pacific Ocean — squid capable of reaching at least 100 lb. and six feet or more in length. Also called jumbo squid, flying squid or los diablos rojos, Humboldt squid are unique in that they have demonstrated aggression toward human beings when encounters occur — encounters that are rare due to the deep-water habitats where the giant squid are normally found. However, more recently Humboldt squid have expanded their range from tropical waters to as far north as the West Coast of the United States, British Columbia, and Alaska, and have been observed frequenting much shallower waters.

Anyone who has ever enjoyed fictional books about sharks or giant squid, or movies about the same, might enjoy reading BELOW. The author first conceived the idea to write the novel about Humboldt squid when the animals began appearing in the ocean off California in large numbers several years ago; in 2009, there was even a documented attack on a scuba diver. Unable to locate a published fiction book about giant Humboldt squid, the author figured that people with his own interests in sharks, giant squid and other ocean life, and who enjoy fast-paced thriller novels, might be excited to dive into a fiction book pitting Humboldt squid against humanity.

“One of the challenges in writing BELOW was making Humboldt squid into villains, without demonizing the actual animals,” Lockwood says. As a scuba diver and avid outdoorsman, ocean conservation is important to the author. He hopes that his novel will be a fun diversion that will get readers more interested in Humboldt squid and in the need for ocean conservation, and that readers recognize that this is a fictional novel about the species, primarily intended for entertainment.

BELOW is available at online booksellers including Amazon and Barnes & Noble.